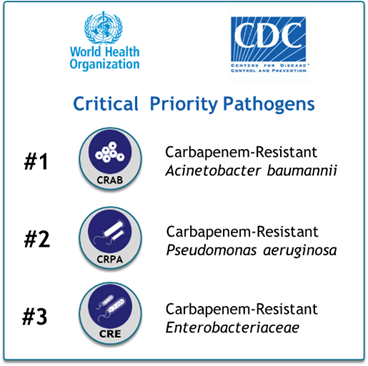 Antibiotic resistance is a growing global health problem recognized as n°1 priority by the WHO. It is estimated that 5-10% of hospital patients in US and Europe develop a hospital-acquired (nosocomial) infection, with > €30 billion additional annual costs to public health and > 100,000 deaths due to drug-resistant bacterial infections. By 2050, antimicrobial resistance is predicted to kill > 10 million people every year. Current antibacterial chemotherapy is increasingly compromised due to the spread and transfer of genes which encode resistance factors. For carbapenem antibiotics the major threats are carbapenemase enzymes, including metallo beta-lactamases (MBLs), such as NDM, which are highly prevalent throughout the Asia Pacific region, and serine beta-lactamases (SBLs), such as OXA and KPC, which are widespread throughout the world. Better inhibitors are required to restore the effectiveness of carbapenem antibiotics.